Lightsabers, and other weapons used by experienced Force Users, are both tools, and weapons. They are an extension of one's being and depending on the type of Force Crystals used in the lightsaber, they can further empower the Force User.


First-time constructing can take a simple design well over a month for many non-Tech savvy younglings, while more complex designs and different/unique types of Force User weapons can take several months to get right.

Rushed designs are known to go badly wrong in duels. Namely, the weapon exploding due to poorly-designed/constructed power cell modules, or emitter energy circuitry. When this happens, severe injury and death are the likely outcomes.

The Focusing Lens is a singular, large crystal that has been cut into a small lens. Those wishing for a more damaging blade, will go for these type of crystal chambers.

Longer Force weapons like saber pikes, light tridents, and saberstaffs house 2 Crystal Chambers - each with 1 Focusing Lens and 1 Primary Crystal. They aren't supposed to use Focusing Crystals due to the complexity of constructing these weapons, as well as the greater potential to overload them.

Lightsaber-compatible crystals are also extremely powerful, even when not attuned to a wielder. So a longer weapon with 2 crystal chambers can be extremely dangerous and not advised for first-time weapon builders. 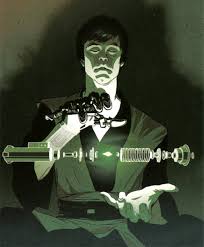 No matter how well one constructs their Force weapon, if the Primary Crystal isn't attuned with the weilder, the weapon will not perform optimally. On first-time activation, it may not work at all.


During the entire build process, Force Users are encouraged to meditate with their crystal. In doing so, the Primary Crystal and Force User embue each other and form a symbiotic relationship. Without this vital bond, a brand new weapon cannot work.

Force crystals know who they are meant to be with. This is why places like Ilum are so special to Jedi, and Mustafar is so vaunted by Sith. Some Force crystal caverns are naturally attuned for specific types of Force Users.

Once a Primary Crystal is bonded to a Force User, and their weapon finally is able to function properly, anyone can use the weapon. But it will perform best with the one who constructed it.

Most parts of Force weapons are easily acquired. The Primary Focusing Crystal, however, is the hardest component to acquire. Many of the known locations of Force crystal caverns archived in the Jedi Temple's library were sacked and now heavily patrolled by Imperial forces

As such, many Force Users have been forced to make synthetic Kyber crystals for their weapons. These crystals are extremely volatile and can be tailored to be just about any color the weapon creator desires.

Sith commonly meditate with pure Hatred while their crystals are grown. And since synthetic crystals take that which you put into it, Dark Side versions of these crystals aren't only powerful Force Foci, but deadly explosive and incredibly difficult to find power cells and emitter circuitry boards that can stomach so much raw power generated from them.

This is why some Force Weapons have vents as crossguards - to keep the hilt from overheating and overloading.